Have you ever sat in a meeting, voiced an opinion, and had someone else in the room follow you with “okay, that’s a fine opinion, but…”? Did whatever came after the ‘but’ invalidate your opinion and halt further discussion on that idea? The Lawline team has a solution for you, and we learned it by taking a 2-hour improvisational comedy class. That solution is called “yes, and”. 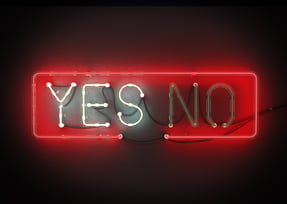 The first rule of improv is to always say yes. This means that if someone brings you an idea while you’re improvising a scene together, you should always be building on their idea, and not shutting it down or pivoting down a different direction. Improv is about active listening, acknowledgement of what your partner is bringing you, and collaboration. It’s not about coming into the scene with really funny phrases prepared in your head that don’t make sense in the context of the scenario that your partner is giving you. In this regard, there are overlaps between improv comedy and business.

Our teams went through four or five improv games, led by our usual instructor from the Upright Citizen’s Brigade, John Timothy. He’s a rockstar. These games had a similar theme- to finely tune that golden first rule of improv, and ingrain the idea of saying yes in each one of us. 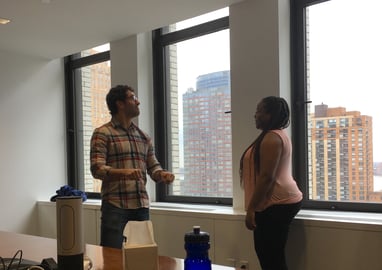 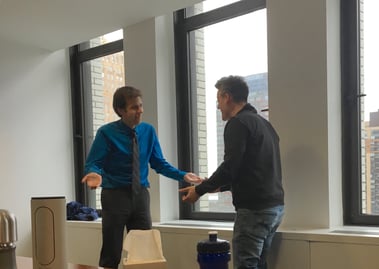 One particular game stood out to me because I felt that it had potential benefits extending beyond the workplace, and could actually help with networking and forming new relationships. The premise of the game was to have one person approach the other, imagine that they have a very specific and unique profession, and say something that a person in that line of work would say. Then the other person would have to think on their feet, and reply with whatever someone would respond with who lived in that first person’s world. The exercise strengthened the ability to be empathetic to a new environment, and to contribute to a conversation with someone in an industry outside of your own.

This spoke to me about networking, because oftentimes when you meet someone new, you think to yourself, “I work in business, what do I know about horseback riding/clown camp/the NBA?”, and through using the “yes, and” technique, you can meet someone working in a profession that you know very little about, and still manage to form a connection with them.

The improv was fun, and it was also insightful on how to build relationships and become stronger collaborators.

You can learn more about our instructor, John, and his work here: http://www.johntimothy.com/