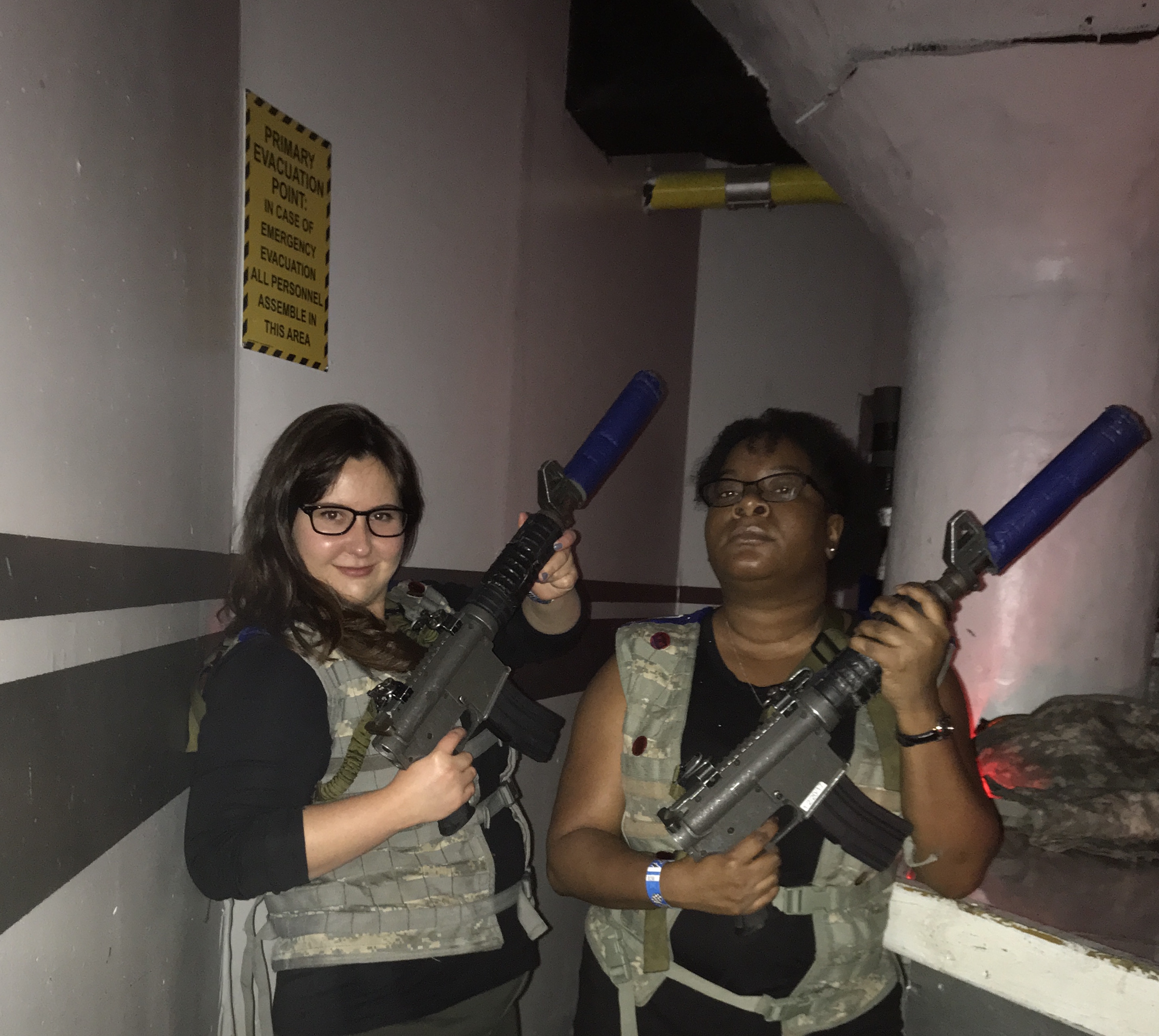 On Friday November 3rd, Lawliners took a field trip to Indoor Extreme Sports in Long Island City to fight zombies and learn about the importance of teamwork. There were 2 different laser tag options- one was the Zombie course and the other the Arena course. We split into 2 teams in each location and battled it out against one another. The first noteworthy part was that we were using real recommissioned guns that now shoot lasers instead of bullets. We were all surprised by how heavy they were- and realized quickly this was not your usual kids’ party type of laser tag.

In Zombie laser tag, the course which is described as a “Zombie Research Prison Facility” was pitch dark and everyone had to depend heavily on their sense of hearing to anticipate where their opponent may be hiding. The only time I could see was when I was being shot at because the laser beams lit of the rooms and the creepy items and creatures they contained. In my group, the teams included Ann, Kathleen, and Oi versus Rich, Steven, and myself. Ann, Kathleen, and Oi won again and again in this nocturnal environment, while Rich, Steven, and I were often all killed before we even managed to kill any of their teammates. 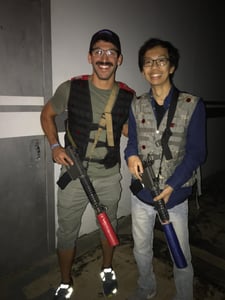 After hydrating, we switched courses with the other teams (Sarah, David, and Beth versus Mike, John, and Victoria.) As we passed in the hallways, each team shared “war” stories as we hydrated and tried to emotionally and physically prepare for the next challenge. We heard repeated praise about the tenacity of birthday boy Mike, who had boundless energy to compete and fight his opponents.

The Arena course was entirely different- it was more like a typical first person shooter video game. However, unlike video games, this guerilla warfare course was very active as demonstrated by the great number of steps tracked by my fitbit. In addition to the challenge of having to constantly be moving, there were also a great number of obstacles to get around and where people could hide. In this environment, Rich, Steven, and I finally found our rhythm.

We were able to execute on our pre-discussed strategies and use hand signals to notify each other of our opponent’s locations. That being said, there were countless instances where I would get killed by Oi who would kneel and wait patiently for his victims to approach. At the end we all finished feeling very sweaty, but more importantly we were bonded with our fellow Lawliners who we went to battle with and survived. This event was a great embodiment of Lawline’s core value of “Create” as we had to come up with unique solutions on how to work to defeat our opponents, and “Care” because we always made sure we had the backs of our own teammates. I for one can’t wait to do it again next year!